Alaska’s Katmai National Park offers a unique opportunity for photographers seeking close-up images of brown bears. Several tour operators are licensed to land on the desolate beaches of Hallo Bay and lead visitors on foot into an area where bears are preoccupied feeding on sedge grass. Tour guides are trained not to interfere with the animals activities and to avoid invading their territories. Wildlife photographers with 200mm to 800mm lenses capture intimate portraits of mother bears and cubs. At Brooks Falls, photographers positioned on elevated boardwalks take images of bears feeding upon salmon jumping up the falls. At nearby Hallo Bay, photographers walk among the bears with no barriers. No attacks on humans have occurred during these tours to date. Those who have experienced this intense interaction with the apex predators are forever changed–and live a life fully aware of the value of preserving the wild places that still exist in our world. This personal account provides a glimpse into this one of a kind experience.

The small Cessna aircraft took off from Homer, Alaska and rose above the fog and rain of Cook Inlet. We were headed west to Hallo Bay in Katmai National Park and Preserve to walk among Alaska’s Brown Bears. A glacier covered mountain range appeared closely beneath the wings. Dozens of dormant volcanos sparkled with blinding white snow. The six seater glided between peaks over waterfalls and braided streams descending to a verdant coastal plain.

Ahead was a wide beach of sandbars, tidal pools and weather beached logs. The light Cessna bounced to a stop on its fat balloon tires and our pilot/guide Ben, gave us our bear watching instructions:  “Stay together single file and don’t run, if you become afraid”.

With cameras, backpacks and this note of encouragement, we

climbed a dune line separating beach and bears. We wore waders to slosh through a damp meadow of dark green sedge — the top of the early July menu for Alaska coastal brown bears.   Not thirty feet ahead a startled female with three cubs rose on her hind legs.

“Back to the beach!” Ben instructed,

“We are too close and she is agitated.”

A half mile further down the beach, we broached the dune again, and this time emerged safely positioned from dozens of bears—all spaced about an acre apart.

The closest bear was a short telephoto shot away and I started taking photos. The thousand pounder appeared well-fed, focused on consuming his daily requirement of twenty pounds of sedge.  His thick fur shown blonde in the sunlight while his dark dark eyes seemed small for his broad round face.

“We are going to hike into the meadow about four miles, said Ben. “Its safe, no party of three or more has ever been attacked,” he added when we hesitated for a moment before jumping into formation behind him.

fear and awe that would not subside for the next three hours.

We walked within a hundred yards of  twenty to thirty bears ranging from year old cubs to ten foot long adults. We were getting the photos of a lifetime. Bears laying on their backs. Bears busily chomping grass (It tastes sweet like Aurigula salad—Ben suggested we try some) Mothers leading cubs. And cubs play fighting with each other.

Our minds calmed a bit as Ben described how the bears have become used to the human visitors who respect their space.

In a few weeks, the bears would move to the beaches and rivers to catch Salmon, but this first week of July, they feasted on sedge and were unconcerned with humans.

We sloshed across a shallow stream and encountered a large bear that did not get the memo.  His angry eyes and flashing teeth said he dis not approve of us, Air Bear Tours,  or any group of intruders into his territory.  The giant grizzly stood on its hind legs frightening even Ben. Then began pacing back and forth in front of us, huffing and  spitting while zig- zagging closer and closer.

“We need to group tightly together and get on one knee,” Ben commanded, “ It’s a show of submission.” he then explained.  We dropped and froze in place. No one spoke.

I thought of the three page disclaimer I had signed

and the fact that Ben carried no gun or bear spray, only a flare.  I wondered if we had done a complete job of washing the Sockeye Salmon scales from our recently purchased Orvis adventure pants and parkas.  Happlily, Mr. grouchy bear grew tired of us and let us pass.

seemed to be 15 minutes—but we had focused, corrected exposures, checked images and focused again thousands of times.  Back at home, it would take weeks to review and edit the trove of wildlife images within our memory cards.  Our personal memories of walking with the bears, however ,would last a lifetime.  Each of us agreed. Nothing in our travel experiences had ever equaled the intensity of standing among the giant brown bears of Katmai.

Photo Masters Workshops offers a three-day workshop each summer entitled, “Brown Bears and Golden Eagles” Photographing the Brown Bears of Alaska is an experience every serious nature photographer will cherish.

Day one includes a fly plane trip to Hallo Bay. Day two features a pontoon plane trip that combines salmon fishing near Lake Clark National park. (The salmon we catch attract bears and bald eagles for our photographs—and become the evenings meal) Day three includes a private boat cruise along the Kenai Fyords where whales and birds can be photographed against a backdrop of glacial ice cliffs.

To join an interest list and learn more, email Bob Gibson at rjg@rjgibson.com 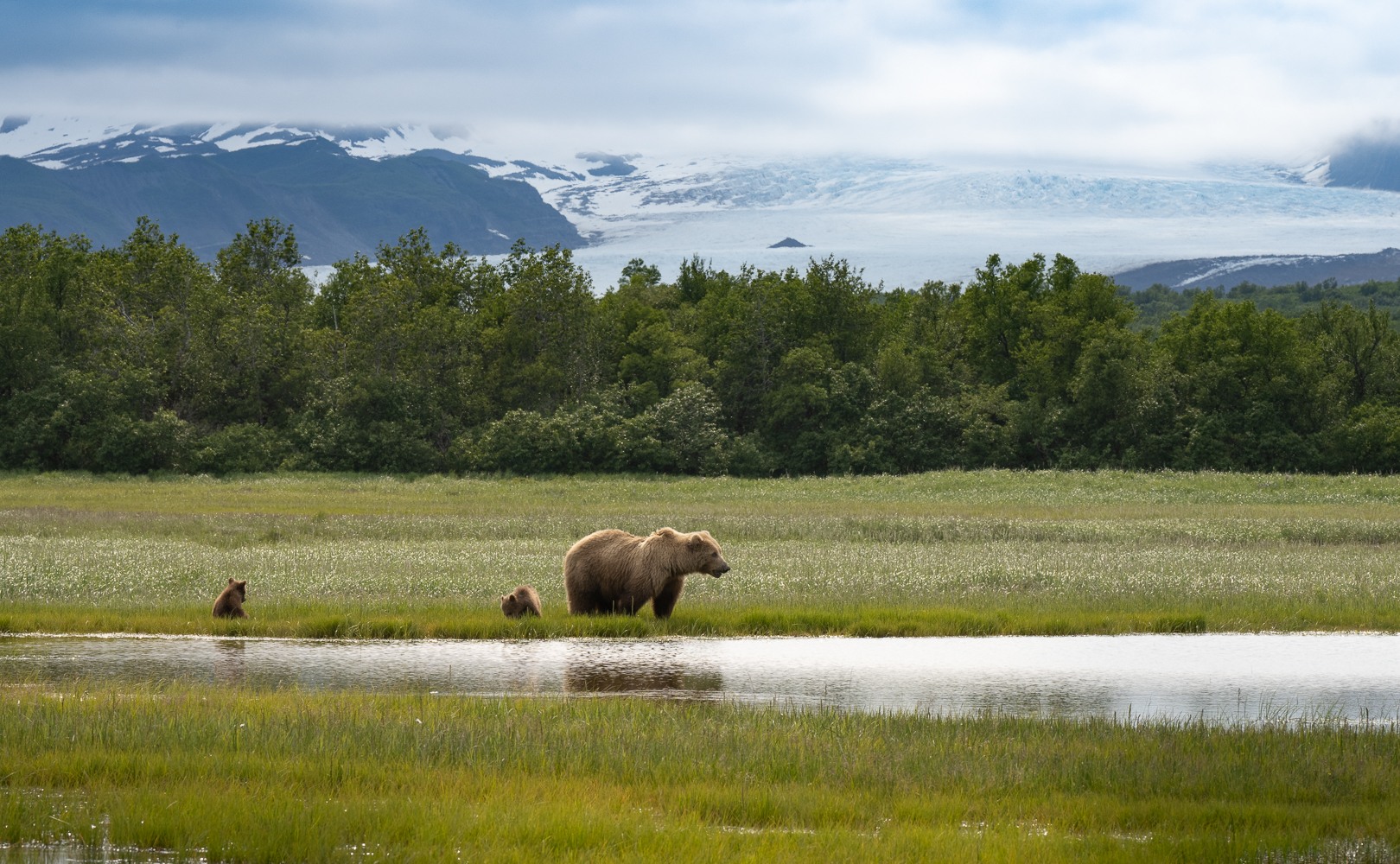